Posted at 16:17h in Training by Annie Clarke 0 Comments
1 Like

How to energise and engage your learners…

In my last blog post ‘Now we’ve broken the ice…’ I highlighted the important benefits that a well constructed icebreaker or introductory activity can have for both learners and trainers.

When I was relatively new to the world of Learning and Development I was always very conscious of including some form of energiser after breaks and lunch to mitigate against that post-break/lunch slump. However, in the last few years I have recognised the importance and value of including an energiser when I can feel the energy in the room starting to dip, regardless of what point we are in the session. That’s why I always have a few extra energisers up my sleeve that I can pull out as I regularly scan the room checking for levels of engagement.

There are multiple benefits to using energisers throughout the session. Ultimately moving individuals around early on in the session helps you as a trainer set the tone for the rest of the session. It can also help engage learners who have an Activist preference and like to be ‘doing’. I also like to use energisers and group dividers to help lighten the mood when there has been a debate or a challenging topic covered in a group discussion or activity. Incorporating energisers and group dividers can also be useful in managing quiet or domineering participants in the training room. By strategically placing different participants together you can often manage the energy and contribution of individuals whether they haven’t been contributing or perhaps they have been contributing too much! I also like to use energisers to inject competition and test out topics covered in the session such as team development and dynamics.

My three favourite energisers are as follows: 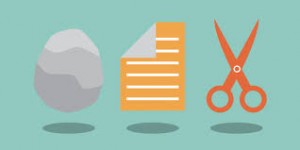 For this energiser I ask everyone to partner up with someone (often I’ll ask them to pair up with someone they haven’t yet worked with to ensure they are meeting as many of their fellow participants as possible). Tell them that they are going to play one game of rock, paper and scissors with their partner. The winner from that game will go on to play a winner from another pair. If they are a runner up (never any losers in the training room!) they become the winner’s cheerleader. They keep going until there are only two players left who each have their own group of cheerleaders. When there are only two players left, they play best of three. Have a prize for the winning player.

The advantages of this are that it needs no preparation and people love an element of competition. Be prepared to go through the rules as sometimes people don’t know the game. If you have an odd number in the room be prepared to join in too!

You can also adapt this energiser into a group divider by getting the group to play one game and grouping the scissors together, rocks together and paper together. Sometimes you might need to play this a couple of times to get a good distribution of learners in each group. 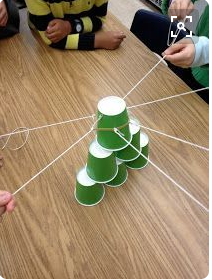 As a tougher alternative you can ask the group to stack the cups in a pyramid rather than on top of one another. This will involve them stacking three on the bottom, two in the middle and one on the top.

If you want to make it even more challenging you can place the cups around the room rather than have them on the table in front of them and ask them to collect them as a team using the elastic band and string. You can ask them to stack one on top of one another or create a pyramid.

Have a pack of cards strategically placed around the room. Split the group into two or three groups. Tell them that the winning group is the first group to get a full suit of cards.

If you want to make it more challenging you can put out two or three packs and make the winner the first group who gets a full set of cards.

Again, this energiser can be adapted into a group divider by having the same number of cards out as people. The participants group themselves according to which suit of cards they have; hearts, spades, clubs or diamonds.

My current favourite group divider is ‘super, smashing, awesome’. This is really simple in that you give each participant a word such as ‘super’, ‘smashing’, ‘awesome’ and ‘brilliant’. You have as many words to assign as groups that are required for the activity. You then ask everyone to find the people with the same words as them. This leads to lots of ‘Who’s awesome?!” ‘Are you brilliant?’ what’s not to love?!

As with icebreakers it’s really important to exercise some sensitivity. I have seen some trainers line people up in order of height for a group divider and obviously height can be a delicate subject for some people – so one to avoid. Also it’s really important to be aware of any impairments in the rooms which might restrict the ability to participate and have adaptations at the ready.

Do you have a favourite energiser or group divider? Let us know in the comments!

Next blog is focusing on one of my new concepts called The Wow House and different techniques for creating high impact training sessions.

Annie’s Training Company runs a range of Train the Trainer sessions. For a chat please feel free to contact Annie directly via: annie@anniestrainingcompany.com

Sorry, the comment form is closed at this time.